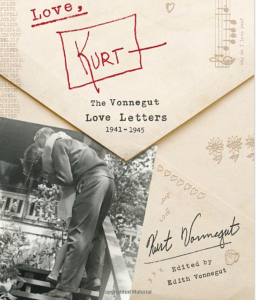 Love, Kurt: The Vonnegut Love Letters 1941-1945 (Random House) is an unexpected and delightful addition to the Vonnegut canon.  Edited by Kurt’s daughter, Edith Vonnegut, the book gives readers a look at the hundreds of letters Kurt wrote to his future wife Jane Cox, his words documenting their burgeoning relationship and dreams for the future.

In the letters we see Vonnegut grow from a college student at Cornell to an Army recruit preparing for his deployment to Europe, where his fate in a Dresden slaughterhouse awaits.  As a snapshot of the early life of a famed American author, the book is a valuable biographical document, but Love, Kurt stands out most for the passion and energy of the letters.  Vonnegut’s playful wit is on display in each one as he tries to charm Jane into marrying him.  As if we’ve entered a museum, we see the actual letters: many typed, some hand-written, most of them decorated with Vonnegut’s mischievous drawings and graffiti.

The letters impress for how enjoyable they are to read.  Even when writing about the mundanities of college life, Vonnegut finds the humor and has fun describing the scene.  Traces of Vonnegut’s mature style and voice are more evident in the letters than in many of his early published stories and in nearly all of the work published posthumously.

Simply put, Love, Kurt is great reading, and even casual fans should enjoy its depiction of a young man filled with love, lust, and literary ambition.  Though only one of Jane’s letters appears in the book, she too emerges as a fully developed character, an intelligent and popular young woman with an astute literary mind, her presence critical to Vonnegut’s future success.

Interspersed with the letters is commentary by Edith Vonnegut, her thoughts providing context and insight into her parents’ lives.  Her admiration and love for her parents is clear but never rose-colored, her parents’ future divorce hanging like a sad shadow over the exuberant love expressed in the letters.

Edith Vonnegut shared her thoughts with The Daily Vonnegut.

Q: What was your reaction when you first found these letters?  Were you aware that Kurt had written so frequently to Jane during these years?

Edith Vonnegut (EV): I was floored…Literally.  When my husband and I bought the property from my siblings, I went to clear the attic which was packed with junk mainly. When I came across that little box, I expected Christmas cards from the 1950s. My mother saved everything. I had no idea he had written to her so much. It was winter and I plopped myself then and there on the floor and started reading.

Q: Almost from the start, Kurt is proposing marriage.  Do you think this was characteristic of that era or was there something about Kurt that made marriage so imperative?

EV: He was unusual in his determined solo quest for my mother. In that era it was the norm for young, college-aged people to date an assortment of others. From the first time they met, there was no one else for my father.

Q: These letters are highly romantic and passionate, and show Kurt as intently focused on building a long-lasting marriage.  These elements are mostly missing from his fiction.  Do you have any thoughts on why that might be?

EV: My thought is that when he decided to write, he wanted the topic to be about the whole entire universe and the meaning of life. A tale of the simple happy marriage of two people was simply not a big enough topic. He was never very good at in depth character descriptions and relationships. But was excellent at describing the big picture.

Q: In the very first letter in the book, in the first paragraph, Kurt writes about moving through time, as he famously did in Slaughterhouse-Five.  Did you notice any aspects of the letters that reminded you of his later work?

EV: Yes, plenty. There are many glimmers of what he developed later. The science he absorbed while at Cornell is there. His belief in telepathy and unseen forces is there. His quest to try to figure out what the heck is going on is there. He thought science and magic and poetry were related. It’s in the letters. And the humor in the letters when he was just 19 is pure him.

Q: In the letters Kurt is consistently praising Jane’s intelligence and her own writing ability, with references to the work “they” will later create.  To your knowledge, did Jane ever pursue her own writing during the early years?  Did Kurt ever encourage her to write her own stories?

EV: Jane wrote a book about the tragedy that brought her four of Kurt’s nephews to come live with us. It’s titled Angels Without Wings, published by Houghton Mifflin. It describes what happened in those years. Though she never complained or talked about it, she put her writing and creative life aside to raise these new children in addition to the three she already had. She was an excellent mother to all of us and gave all her heart and soul and time.

Q: Your mother was convinced that Kurt was another Chekhov years before he had published a single story.  Do you think this was based on the strength of these letters?

EV: She was a Phi Beta Kappa scholar from Swarthmore. She recognized his genius when he started writing short stories for her. To impress her and win her, I think. I see no evidence that it was because of the letters.

Q: Did you have any hesitancy about publishing these letters?

EV: I had some hesitancy because of the personal nature of the letters but felt that what they revealed about both my parents was so complimentary and important to who they were at that age that they were justified. For scholars they are significant inklings of who my father would become. For my mother, they finally reveal how crucial she was to who he would become. In my heart I felt I was honoring both of them. Plus the smartest people I know encouraged me. The reviews that came out by Publishers Weekly, Kirkus Reviews, and the Indiana Monthly to name a few were all very positive which give me further confidence that I did the right thing.

Q: To paraphrase your brother Mark, when you were growing up your father was a failed car dealer who couldn’t get a teaching job on Cape Cod.  At what point did you realize that things had changed?

EV: 1969. When Slaughterhouse-5 was published, everything changed. We had money for the first time. I was 19. Life magazine came to do as story on him. My father was famous, though I’d been reading and loving his books since I was 13.

Q: What was it like to read your father’s books?  References to his personal and family life were common.  Were you able to separate yourself from the role of daughter when experiencing his work?

A: I absolutely loved his books from the start. I felt unbelievably lucky to have that guy living downstairs. I didn’t have to separate myself as his daughter. I wouldn’t know how to do that anyway.

Q: Your parents’ marriage didn’t last.  In the Introduction, you write, “Would Romeo have left Juliet if they had lived long enough?”  Was it difficult reading these letters knowing how things ended?

EV: Yes, it was difficult and depressing to see how such a great deep love and respect could just go away.

Q: Did you learn anything new about Kurt and Jane from reading these letters?

EV: I learned how gifted he was from a very early age and I learned how incredibly important she was to his developing as a writer. She edited him, encouraged him to never give up and gave him the space and time to work. Without her, he may have remained a failed car dealer.