In December 1970, Kurt Vonnegut wrote to his friend, fellow novelist Jose Donoso, “…The adventure of having a play produced was harrowing…But I had to begin my theatrical career with something—and now I have in fact begun. I’ve written six novels. Now I want to write six plays.” (Kurt Vonnegut Letters, Delacorte Press, 2012 p. 165.)

Vonnegut’s adventure was the New York debut of Happy Birthday, Wanda June, the only full-length play Vonnegut published in his career. Hard to find in print, and rarely performed, Wanda June is among Vonnegut’s lesser known works, but that may change with the upcoming production by New York’s Wheelhouse Theater Company at The Duke on 42nd Street in Manhattan. Tickets are now available for this limited run beginning October 18th through November 29th.  Purchase tickets here. 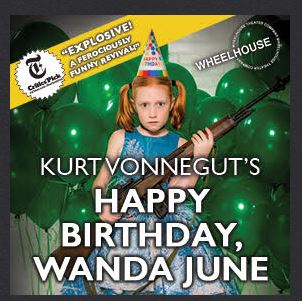 Jeffrey Wise and Matt Harrington, Founding Members of the Company, shared their thoughts on the play in a recent interview with The Daily Vonnegut. In the current production Matt plays the role of Dr. Norbert Woodley while Jeff is the play’s Director.

Q: What inspired you to stage “Happy Birthday, Wanda June?” It’s not among Vonnegut’s most well-known works?

Matt: Yeah, it’s definitely not among his known works, and the most common response I get when I talk about it with people is “Wait, Vonnegut wrote a play?” I had seen a production that some friends of mine from college did about twelve years ago now, and it stuck with me. We were trying to put out heads together and think about our next production, and it kind of floated back into my mind. I found a copy of it, and I remembered that it was compelling; I remembered that it was funny and provocative, but then when I started reading it I thought, “Oh shit, this is so much more relevant and topical and compelling for a contemporary audience than I even remembered it being.